Is It Possible to Grow Carbon Neutral Cannabis? (Hexo Thinks It Can!) 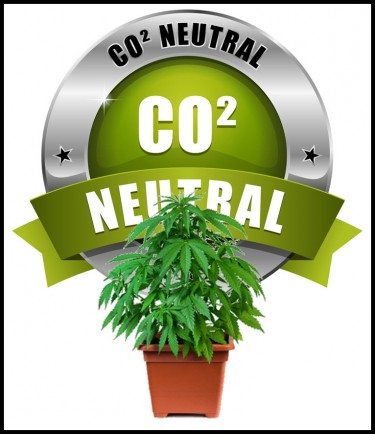 One of the major issues at the forefront of international discussion is – climate fill in the blank. I don’t want to call it “Climate Change” because there’s the subtle argument that “climates change” – of which other people would interject with, “but this change is artificial” and then we’d digress into our ape-like methods of flinging intellectual poop at each other.

Rather, let’s talk about energy efficiency.

While you believe that carbon is one of the main contributor to rising global temperatures – which it does to a certain degree but water vapor plays a far more significant element within the contribution of trapped heat.

But that’s for another article.

Irrespective of the science behind all of this – there is a growing move within multiple industries to become “Carbon neutral” – which means that they will use energy from “renewables” over sources like carbon.

Within the cannabis industry, this would significantly help reduce the overall carbon footprint of the industry – which is high!

Why is it so high?

Because cannabis brands are forced to use methods that aren’t the most ecologically proficient and other companies simply don’t have the luxury of growing outdoors.

For example, in northern states – it’s imperative to have a good harvest during the year because a lot of the year is covered in snow.

This means that weed that is sub sequentially grown in these areas tend to be done indoors – this means elevated power usage, which is the primary driver for high carbon emissions.

But is it possible to Grow Carbon Neutral Cannabis?

To Canadian company Hexo – this question is answered with a resounding “YES!”

The CEO  Sebastien St-Louis said recently that their goal for “Carbon neutrality” could be achieved as early as this September.

Hexo is primarily a hemp-company that launched a hemp-derived CBD infused drink in Colorado recently. To date, Hexo has offset 63,000 kilograms of plastic through the Plastic Bank, which equates to more than 3.1 million plastic bottles.

They intend to go beyond that – and become a leader in the corporate world on how corporations can carry the bulk of the effort against the negative effects of mass industry.

However – this altruistic move may also be inspired by the fact that consumers are far more aware of their own carbon emissions and tend to favor brands that are environmentally responsible.

Why the environmental challenges should be the corporation’s responsibility.

One thing that St. Louis said should be remembered by all CEOs in all industries;

St. Louis argues that putting the burden of climate change on individual contributors is a false narrative, and the real responsibility belongs to corporations.

If the top 100 companies in Canada took responsibility for their employees’ carbon emissions by planting trees, it could have a massive impact on carbon generation and the cost would be relatively inexpensive, he said.

“You’re telling me for 800 bucks per person per year, we basically don’t have a climate problem? When you think about it, we’re about to boil the planet alive because we don’t want to spend the grand per person.” – Source

This is 100% true – you can’t place the burden of change on the consumer. The consumer will always select the “most cost-effective solution” available to them. In other words, if it’s cheap and accessible – why not buy it?

Especially if the environmental impact is so far removed?

And who removed the environmental impact from the transaction? The corporations of course!

Trust me, if you play a video of a child working in an assembly line to a customer before handing them their “new iPhone”, not many people would conclude the transaction.

That’s because you would show them the impact of their consumerism – you get to have the latest iPhone while 9-year old Zhang Wei has to work six days a week in horrid conditions for you to get it.

Except, you will never know the story of Zhang Wei because Apple will hide that fact from you with pretty ads and celebrities doing “woke shit!”

How Cannabis Brands can Redefine Corporatism

I’m not saying that Hexo is doing this solely for environmental reasons – I am almost certain that there is some sense of economic driving factor involved.

However, we can also not say that people like St Louis is doing these changes solely for economical reasons. I think that with the rise of cannabis commerce – there is also a new frontier CEO being forged by the shifts within the marketplace.

For too long, profitability has been the main driving force behind corporatism.

Make money at the expense of everything else!

“Sharks, Bulls, Eagles!” these are the traits associated with CEOs, except – these days that predatory archetype isn’t gelling with consumers.

There’s plenty of businesses already working on this – and helping to reforest the world. And we need to encourage this type of behavior.

Fortunately, consumers are responding to these green brands and as a result – we are seeing a slight shift occur within the marketplace.

What’s the one thing cannabis companies should be investing in?

If there’s one thing I would invest into if I was a coalition of cannabis companies it would be to create desalination plants all over the world.

For example, California’s cannabis growers could easily work together with the wine industry to fund desalination facilities – which would immediately solve their water crises. There is no need to use the fresh water from lakes to water crops – we could be getting all of that from rising water levels in the ocean.

If you don’t think this is possible, I invite you to study up on how Israel solved their water issues, and now most of their water supply comes from the ocean.

Apart from renewable energy sources – the cannabis industry uses a lot of water and if this isn’t addressed soon – there could be a crises on our hands one of these days.

We have the technology and the means to build these alternative sources of energy, and resources – perhaps it will take a handful of savvy cannabis entrepreneurs to harbor in a new culture of giving back more than we are taking.

As for Hexo – kudos on leading the charge – at least publically!

CAN CANNABIS SOLVE THEIR CARBON FOOTPRINT, READ THIS!

ABC15 News Segment: Can CBD Cause You To Fail a Drug Test? | A Better Today Recovery Services