What is Anandamide and How Does It Relate to THC and CBD?

You have an extensive endocannabinoid system in your body which plays a very crucial role. Anandamide is an endocannabinoid that is one of the essential molecules in your body. So what does it do for you? Is it possible that THC and CBD have a tremendous impact on them? What can you do with it? Let’s get answers!

Anandamide happens naturally in the body as an endocannabinoid (one of the many). There is a lot of interest in it today because it is apparent that this molecule can affect the body positively, and now scientists are keen on harnessing its potentials.

Some phytocannabinoids in the cannabis plant can boost Anandamide’s level in your body, thus making controlled application possible.

Endocannabinoids, what is it about?

Some people are always shocked when they discover that their body has its way of creating and maximizing cannabinoids called the Endocannabinoid System (ECS). But it’s true, and it plays a crucial role in our health.

ECS is connected to several aspects of our bodies, such as our memory, cognition, cell growth regulation, homeostasis maintenance, cognition, and motor control. It could be one of your body’s most essential systems.

There are also two significant receptors relating to ECS: the CB1 and CB2 receptors. These are receptors founds in almost every part of your body. Now, Anandamide is one of your body’s endocannabinoids with solid links to both receptors. So what is Anandamide?

The concept of Anandamide

Anandamide is a natural cannabinoid. Its name is from a Sanskrit word that means happiness or bliss. It is also called the “Bliss” molecules. Anandamide has powerful effects despite being naturally produced in small quantities.

However, it isn’t safe to assume that more Anandamide is excellent for the body. As with all body processes, the balance should always be the focus. Some researchers suggest that excess anandamide will lead to an overstimulation of the CB1 receptors. When these receptors are overly stimulated, it can disrupt your body’s reward system and increase the possibility of more diseases such as obesity.

Anandamide is not water-soluble: it cannot be broken down into a liquid state. For it to break down, your body needs to produce fatty acid amide hydrolase (FAAH) and Monoacylglycerol lipase (MAGL). Without these enzymes, Anandamide will not be present in the body.

It is important to note that naturally produced Anandamide cannot make you high even though it causes feelings of euphoria, bliss, and elation. Anandamide also plays a role in homeostasis, which is a process that enables the body to maintain its regular functions.

For example, homeostasis is what keeps your body cool when the weather is hot, and it keeps your body warm when it’s cold. Without homeostasis, it is hard to think about how our bodies will function. Interestingly, Anandamide is not the only endocannabinoid that affects homeostasis, but it remains a more significant part of ECS, enabling effective body regulation.

The Phytocannabinoids: How CBD and THC affects Anandamide

So to the question of the moment, what role does cannabis play in all of these? Cannabis has its peculiar cannabinoid system, which produces phytocannabinoids. These phytocannabinoids are at least 113 in number, and they interact with your body’s ECS, with each of them having different effects.

Now two of these cannabinoids are THC and CBD. Although there are the two most abundant cannabinoids in the cannabis plant, they interact with the ECS in varying ways. Therefore, they will have different effects on the body.

THC is one of the most well-known cannabis cannabinoids, which causes a high and interacts with its CB1 and CB2 receptors. THC mimics Anandamide in your body, which makes it easy for it to bind to the same receptors. This explains why it has a profound effect; think of it as a high dose of Anandamide.

More so, enzymes in your body can break down Anandamide but find it complicated and challenging to do it with HC. This is why the highs from THC can last for more hours while the effects of Anandamide are short-lived.

CBD works differently. CBD doesn’t have any affinity for CB1 or CB2 receptors, and it appears to block them, limiting their uptake. Hence the reason why CBD seems to counteract the psychotropic impact of THC.

CBD also carries your body’s production of MAGL and FAAH, which enzymes are used to break down Anandamide. Doing this increases the concentration of Anandamide that is available to the CB1 and CB2 receptors. This is why CBD can produce feelings of serenity, well-being, and happiness without leading to a high.

How to increase Anandamide

A few ways to boost the Anandamide in your body, and not all the methods entail smoking weed. Some anandamide foods and supplements you can consume and activities you can engage in boost your Anandamide. Here are some of the plausible methods:

Exercise improves your sense of well-being as you feel fit and well after each session. Interestingly, there is a rise in Anandamide half an hour after physical activity. So going for a swim, spending time in the gym, or running can increase your endocannabinoid count.

Chocolate has the properties that slow down the Anandamide’s breakdown, which causes even more Anandamide to be produced. But be mindful of the kind of chocolate you take as a milk chocolate bar wouldn’t do the trick. It would help if you had cacao nibs that contain all the anandamide-boosting nutrients your body seeks.

The production of Oxytocin when you are in love stimulates anandamide production. A couple of ways to boost Oxytocin production and the most straightforward methods are the physical ones that entail having sex or getting a soothing massage.

So it is evident that Anandamide and the bigger ECS play a vital role in boosting our health and general well-being. From physical wellness to mental health, part of ECS has a profound impact on us.

With Cannabis introduced, it affects Anandamide and other parts of the ECS, which means the body’s cannabinoid can work safely in the system. THC and CBD are doing tremendously well in the health and wellness sector, which is all because of the impact of Cannabis.

MORE ON ANANDAMIDE, READ THIS… 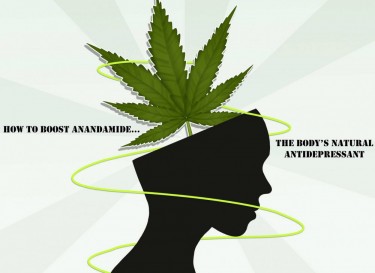 ANANDAMIDE IS THE BODY’S NATURAL ANTI-DEPRESSANT!

What is CBD or cannabidiol and how is it different from THC ?