Why Are Home Prices Way Up? Well, Weed is One Reason if You Live in a Legal State

Why Are Home Prices Way Up? Well, Weed Is One Reason If You Live in a Legal State

If you’ve been shopping around for a new home recently, you’ve probably noticed that real estate prices have increased. This is true, particularly in weed-friendly states. But with 91% of American adults who support cannabis legalization, it will only continue to spread throughout the country and there is no doubt it will have an impact on real estate prices.

A new report by Clever Real Estate reveals that from April 2017 to April 2021, real estate prices spiked $17,113 in states that have legalized recreational cannabis compared to states where use is limited to medical or is still illegal. Cannabis legalization doesn’t just mean higher property prices, but also millions of dollars more injected into tax revenues.

The report also indicates that states where recreational cannabis is legalized and allow more dispensaries to be established translates to bigger property value and more tax revenues compared to states that don’t allow cannabis dispensaries to operate or have inhibited cannabis use to medicinal purposes.

The report’s findings are also interesting. They found that every time a city adds a new dispensary, no matter if its recreational or medicinal, property values jump by $519. And from 2017 to 2019, prices of houses spiked $6, 338 more in legal states compared to non-legal states. It was also those states that have legalized recreational cannabis who saw the most significant increases in their property values.

Meanwhile, there are also 5 states that have already given the green light on recreational marijuana though they are yet to start selling. In these states, it’s predicted that home values will see an increase of $61,343 on average, once sales have already started. But in states where recreational cannabis is legal, it’s California who saw the biggest jump in home values: $128, 341 since 2017.

What Does This All Mean?

In addition, cities that are home to more dispensaries saw a positive correlation with increased home values, which suggests that legalizing cannabis is truly excellent for spurring economic growth and jobs.

Increased real estate values because of cannabis legalization is a GOOD thing. That’s because more tax revenues from cannabis sales also lead to new investment specially in infrastructure and public services, so your cannabis sales taxes certainly go to improving your city. All of these result in more demand for real estate, increased property values, and more revenue from property tax.

But there are also other factors that impact home values. Clever Real Estate explains that these include such as its condition, features, the amenities and services available in the area, and crime rates. Of course, cannabis legalization can have an effect on all of these, though the impact is always positive: more demand for real estate, tourism, and the creation of businesses and jobs. Just look at Colorado: back in 2012, they were the first state to ever legalize recreational marijuana. This is why Colorado is always viewed as the gold standard when it comes to researching how legalization affects a state, and the impact is always positive.

A study conducted by Penn State revealed that in the first year following the legalization of marijuana in Colorado, hotel revenues jumped to $130 million. They also saw a reduction in crime rates while the state enjoyed an increase in job creation brought about by new businesses. Legalization also has other positive effects that improve the quality of life for those who live there: these include better access to medication, less alcohol-related issues, and reduced incarceration.

Recreational Legalization Has The Biggest Impact On Home Values

There are different types of cannabis legalization, all of which are linked to increased home values, explains Clever Real Estate. However, their research has determined that it’s recreational legalization that drives the most impact.

Through a controlled study, they discovered that real estate values in areas that have legalized recreational cannabis saw a $17,113 increase compared to places where it’s only legal for medical use or still illegal. On the other hand, medical legalization increased home values by $1,543 more compared to states where cannabis is still illegal.

For states that have recently legalized cannabis (New York, New Mexico, Montana, Virginia, Vermont), they can expect to see changes in home values once their laws are already completely implemented, particularly if it’s recreational marijuana that they have legalized. They can expect over an average of $60,000 increase in home values when they start selling pot, though it could have spiked to $61,343 if they legalized recreational cannabis back in 2017 – which is $7,302 more than the average home value increase which is $54,041.

The presence of dispensaries – both medicinal and recreational – all have a tremendous impact in home values in states where they are located.

This is important because the economy needs some stimulating especially because we’re recovering as a nation from the financial (not to mention emotional) impacts of the pandemic. States do put the taxes collected from cannabis sales to good use: being invested in infrastructure, public education, criminal justice reform, treatment for substance abuse, and so much more. In addition, states already have plans to redistribute tax revenues to local governments which do a lot in improving quality of life for communities all over the United States. 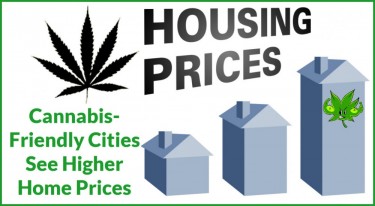 WHY DOES CANANBIS RAISE HOME PRICES AFTER LEGALIZATION?