Which City in America Smokes the Most Weed Per Resident? 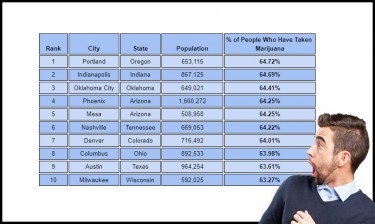 Interesting study, or survey, put out by the Olbg.com blog on the wildest cities in America.  The criteria for a city rank covers such variables as night life, casinos, marijuana use, alcohol consumption rates, adult entertainment establishments, and a few other Friday night favorites.  While Las Vegas was hands down winner in the overall contest of debauchery, as far as weed consumption per population levels, Portland, Oregon and Indianapolis, Indiana came in numbers 1 and 2 for weed usage per resident.

Some interesting tidbits on the survey is that some of the states don’t have recreational cannabis approved, so there is no legal pathway to getting your hands on some juicy buds. Other states have medical programs, but some are just starting out, so to see the population numbers so high, no pun intended, seems like a good trend for future legalization in those areas.

The second point that I find interesting is how closely cities #1 through #10 are bunched up.  Portland leads the pack with a 64.72% of population that used marijuana, but in 10th place is Milwaukee, Wisconsin at 63.27%.  That is a whopping 1.45% difference between the number one spot and ten spot. So out of 100 people you are looking at 1.45 difference in admitting they smoked pot. With a margin of era of probably 0.50% to 1%, you are left with almost identical numbers for the big 10 cites.  This is important as you can know say, if you believe the data, that about 64% of city populations where cannabis is legal, used weed or tried it.  If you went down to spot #20 on the list it may only be a 2% difference, or 2 more people in a 100-person survey, that separates #1 from #20.  We get a good feeling that in legal marijuana cities, about 61% to 65% of the people are using cannabis or have used in in the post.

Let’s not split hairs with numbers and just say, “A little under 2/3rds of people use cannabis is US cities that have legalization.”  It may not be statistically perfect, but you can’t get in trouble saying it as a ballpark.

Here is a link to the rankings… 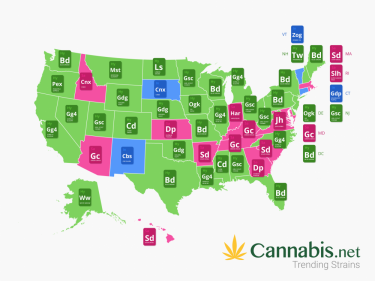 WHAT ARE THE MOST POPULAR WEED STRAINS IN EACH STATE?

What's the difference between CBD and THC?