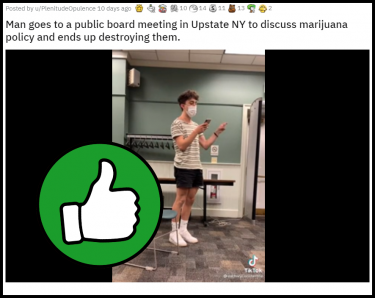 A man in upstate New York is making some serious noise on the internet after eviscerating a public board meeting with facts and destroys them in a video posted on Reddit.

His town decided to ban legal cannabis sales in their jurisdiction, of which the man – Zachery – who was balling some short-shorts and white sneakers, laid down the law.

In this article we’ll be going over some of the most epic truth bombs he hurled in their direction and why it’s important that we have more activists take office to fight the system from within.

“I would like to remind you that we don’t ban liquor stores because there are alcohols, we don’t ban bars because some people choose to drink and drive…so while I respect all your personal anecdotes about why YOU don’t like cannabis – They are irrelevant!”

I couldn’t have said it better Zach.

This argument points out the fallacy of prohibition. Prohibition exists because of the perceived “dangers” of whatever it is they are prohibiting.

In the case of not allowing cannabis dispensaries to operate within your town, these perceived dangers include things like, “Youth Consumption, promoting drug use, etc”

Zach skillfully points out the hypocrisy in this ruling as we don’t use the same measures on arguably more dangerous drugs such as alcohol. Furthermore, Zach points out that the board made their decision on their “personal beliefs” which is responsible for much of our current drug policies.

Another point that Zach pointed out was that by banning dispensaries, they are creating a higher risk of impaired driving since people still have the legal right to consume and now will be forced to consume “on site.”

It’s legal – only sales are banned!

Later on in the video Zachery points out that the state of New York legalized consumption and that adults now have the right to consume it whenever they choose.

He points out that the board cannot stop the will of the people and prohibit the consumption of cannabis, but all they had the authority to do was to ban entrepreneurs to choose to start a business in his town.

They had an opportunity to allow these tax dollars to flow into their town, however they chose not to due to their personal beliefs about cannabis.

Zachery rightfully pointed out that the rules the board passed was not based in science but on their prejudices and limited experience.

This is often the case when it comes to drug laws.

As a psychonaut, I would make readily available substances like LSD, psilocybin, DMT, Cannabis and even Cocaine for personal consumption. Of course, you’d need to have a public education campaign to make the practice of consumption safer – however, these drugs used correctly is far less dangerous than consuming alcohol or tobacco – both which are completely legal.

However, due to the limited experience of these lawmakers – highly restrictive laws are passed that don’t benefit society as a whole.

Zachery continues by saying that he is confident that the public could challenge their decision in a referendum or by simply voting them out.

He also pointed out that he had only 2 hours to prepare since he didn’t know that that they were going to make the decision. This is something that often occurs, these lawmakers have meetings without informing the public.

The activist in this time obtained dozens of signatures to opt in and will continue to push.

The Board Duped the People

Zach revealed that he was there because in July they had a meeting and the apparent conclusion of the meeting with the board was that they would opt in due to the inaction of the board.

In other words, the board said that they would “not do anything” in regards to opting out – since they would have had to take an action to opt out.

This made activists believe that because of this inaction, that legal sales would be permitted. He then pointed out that one of the board members took credit for the public input, only to flip the script later on.

Zachery pointed out that this sudden change of heart from the board was probably because of some “closed door deal” they came to and made a surprise vote to ban sales.

This is something that is far more common that people would like to admit. Many of the places that have legalized cannabis in the past have special interests.

For example, California’s recreational cannabis industry is structured in such a way that it favors large corporate grows over legacy farms.

This is all a power grab from both the corporate world and the political world – both who have been benefitting from each other for quite some time now.

You don’t need to be president to change the US – in fact, most of the major shifts in government happens at a local level. Zachery, a very outspoken activist should run for office and replace the very members he is criticizing.

Of course, this means having to deal with other things that isn’t just cannabis related – but if you want to instigate real change, I strongly recommend you either endorse someone who will act on the behalf of the people, or to run for yourself.

It’s time that we replace the dinosaurs in office with people that actually know what they are talking about. The only way to make significant change – is to BE the change!

Kudos to Zach for backhanding the dinosaurs!

MORE ON CANNABIS ACTIVIST, READ THIS… 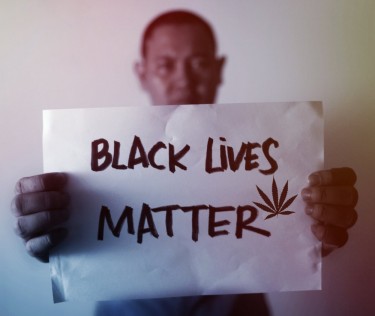 WHY BLACK LIVES MATTER AND CANNABIS ACTIVIST ARE ON THE SAME PAGE!

What is THC-O? THC-O and THC Alternatives Explained