How is Hemp Helping to Fight Climate Change? 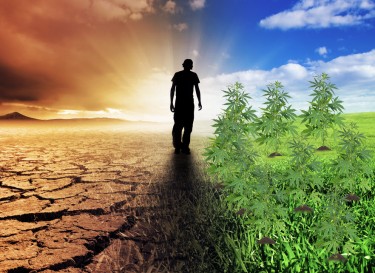 Hemp is easily one of the most valuable crops in the world today.

Not only does it produce the versatile healing compound cannabidiol (CBD) in larger doses than cannabis, but it also has several eco-friendly uses. Scientists around the world already recognize its potential in helping fight the seemingly uphill battle against climate change. It can be used to make a wide variety of things from construction materials to paper, cotton, food, and more but it has such a high value for both the economy as well as the ecosystem.

Carbon dioxide (CO2) emitted by industrial processes especially fossil fuels and livestock are one of the main culprits behind greenhouse gasses that are causing global warming. While plants are great at absorbing CO2, hemp has been shown to be so much efficient in absorbing carbon dioxide compared to other trees and plants.

A 2010 scientific report revealed that each ton of hemp is able to absorb as much as 1.63 tons of carbon dioxide. In addition, it can trap the gas and will store it for as long as hemp is alive. Isn’t that incredible? It’s also just so much more feasible to use hemp because the plant is capable of growing 13 feet in just 100 days, while it takes other newly planted tree species decades to mature.

But there’s also another way that hemp can help humans cut down the dependence on CO2 emissions: since we rely so much on fossil fuels and products derived from them, we can instead start using hemp biofuel, an excellent renewable natural energy source that’s safer on us and the planet compared to petrochemicals.

Hemp Fabric Instead Of Cotton

A whopping 27 million tons of cotton is manufactured around the world each year. We use them in a wide variety of everyday things from clothing to fishing nets, towels, tents, and other things. But did you know that the chemicals used to make cotton are highly toxic, many of them are recognized as hazardous by the World Health Organization.

To grow every pound of cotton, one needs 1,440 gallons of water. This is why cotton cultivation around the world is causing tons of land to turn into deserts, because all the natural bodies of water have been depleted just to cater to the water needs of growing cotton. On the other hand, hemp only needs half that amount in order to grow. But as a result, hemp will yield fiber that’s twice the amount of cotton for every acre.

Hemp fabric is an excellent alternative to cotton. It’s time that we should stigmatize the use of cotton and push for hemp fabrics in order to put pressure on world governments. The benefits of using hemp fabric are numerous: they are stronger, more durable, absorbent, and can even insulate much better compared to cotton.

Deforestation continues around the world just to produce paper, and the trees that are needed to grow to make paper take anywhere from 50 to as much as 500 years to mature. However, hemp can be grown and matures in 100 days, yielding four times as much more paper in a given 20-year period.

In fact, the quality of hemp paper is much better compared to what other trees produce. It’s a cost-effective and more sustainable alternative for paper.

Ongoing soil erosion around the world is reducing the earth’s ability to resist global warming. In the past, experts have proposed pricey solutions such as added water filtration systems to treat rising nitrogen levels in the soil, but actually, the simple method of planting hemp can already make a big difference.

Cultivating industrial hemp does more for agricultural land; it restores and repairs soil that has been damaged all while reducing the nitrogen it seeps out into water. Additionally, hemp’s deep roots can go as far as 9 feet which helps break up compact soil, aerate it, and improve nutrient uptake and absorption by plants in each season. On top of that, when hemp roots grow into the ground, they help make the soil richer, and more fertile.

Soils are also predisposed to contamination because of the many chemicals that are used to grow food. The chemicals and pesticides also get into our food because of surface runoff from water that has been contaminated. All of this greatly impacts the environment negatively and it also means that these contaminants will end up on our plates, causing us to get sick in the long run. Growing hemp can reduce the toxic metals because the plants absorb them.

Plastic is easily the most single-handed notorious man-made product when it comes to impact on the environment. The main material used to make plastic is cellulose, which is derived from petroleum, an industrial product. Cellulose isn’t biodegradable and it’s poisonous to ingest; it can even cause terminal diseases such as cancer. Imagine how much plastic is littering our oceans at the moment, poisoning fish and the people who rely on it.  Hemp plastics could be the solution!

Plastic bags as well as other plastic products such as water bottles only either end up in the sea or landfills, but no matter where it ends up, it takes millions of years to decompose and while waiting, poses risks and problems in both environments. Even if it degrades in the sea, it breaks down into smaller particles that will be absorbed by the marine eco system.

Why aren’t we using more hemp plastics? It’s an eco-friendly version of cellulose that is safer and also biodegradable. Cellulose that has been extracted from hemp is easy to produce, reusable, and an environmentally friendly solution to plastic.

Hemp farming clearly will have a strong impact on helping fight climate change. Hemp biofuel reasearch is showing great results as form of energy and fuel, while hemp batteries are getting a look from EV car makers now, too. But it isn’t until there is a worldwide call to start using hemp as an alternative that it will happen. What can we do to make the call even louder?

HOW LEGALIZATION CAN HELP THE ENVIRONMENT, READ MORE..

HOW LEGALIZATION WILL HELP THE ENVIRONMENT, READ THIS!