Cannabis and Existentialism – The Epiphanies of the Stoned 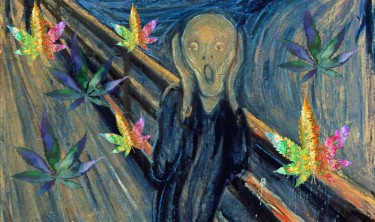 People who smoke cannabis simply have a different view on the world.

For example, this guy, who began smoking cannabis in his 30s more regularly; found himself contemplating his own mortality and the point of it all. Realizing that we are merely animals pretending to be civilized doing shit that will one day fade into the obscurity of existence.

This guy isn’t alone in this. After having smoked weed for over twenty years, I have met my fair share of people who experienced “existential awakenings” after consuming cannabis.

At times, these stoned epiphanies hit you like a bag of bricks, while others percolate over time to completely warp your perspective.

Today, we’ll be taking a deeper dive into why this happens and whether or not fixating on your own existence is beneficial or not.

Why does cannabis shift your perspective?

Everything you add to your body will have some impact in your perspective. This includes eating doughnuts.

Some might argue that it is not the same when we’re talking about food or “drugs”, however, considering that you have a microbiome that directly responds to what you eat – and then influences your decisions based on the prevalence of certain bacteria in the gut – even your choices are dictated by what you put into your mouth.

Of course, cannabis has a much more profound effect on the mind and psyche – the euphoria associated with the rush of cannabinoids definitely will influence your decisions especially when you begin to consider things that are routine.

When you smoke cannabis, you are shifting the way you normally engage with the world around you. All of the trillions of bits of data that your brain is processing now is running through a different neural configuration.

Perhaps the mere act of relaxing your shoulders due to the anxiety you’ve been carrying is enough to shift this perspective. The information is no longer running through the same protocols of interpreting, which then shifts the way you engage with the information.

You experience the “high” but the unconscious mind altered thousands of different ways it interacts with the information. Fundamentally, you are a “changed” being.

Experiencing this temporary adjacent self then expands beyond the typical constructs of the self. You are now experiencing life outside of your normal self.

This enables new neural pathways to form, creating different interaction protocols with the content you consume – ultimately shifting the notion of who you think you are.

After all, we are all simply the stories we tell about ourselves.

It is during these temporary shifts that people get these epiphanies about life.

Sure – you may know that we are creatures that live on a rock floating in space – but you may not have been able to dissociate yourself from the “image” of this understanding and shift into a more “macro lens”.

Witnessing who we are over time and the inevitability of our current actions from the cosmological perspective.

These realizations will fundamentally alter what you deem important. This will trickle down into behavior and over time change who you are in accordance to this newly adopted global internalized truth.

We are under the illusion of the static self. “I am” is a fallacy because it indicates permanence.  It’s true that the “core self” – the being that wears you (the personality) like a mask – remains consistent. However, the self (ego) is in constant flux and is merely a projection of past and present experience.

When you smoke cannabis, you’re constantly inducing altered perceptions of who you are into the grand story that sustains the illusion.

As you make these alterations within the internal narrative – you begin to operate within different self-imposed constraints and slowly, begin to explore new ways of doing things.

These new ways begets newer opportunities which then continues the evolution of self through time.

This is why the guy from the initial example began to fixate on his own existence in a different light. It’s impacting his decisions and what he thinks is important. When the personality becomes stagnant, you get tyrants who need to enforce the norms that they hold true since anything contradictory would mean that what they hold to be true is a lie.

With cannabis, you are able to remove the rigidity of the self and embrace a more fluid concept of the ego. This fluidity enables new ways of engagement and usually sparks a deeper sense of empathy and tolerance to others.

When it becomes too much!

I’ve been experimenting with many different psychedelic substances for many years and while I don’t take these journeys often – I do so with the intent of changing the fundamental elements of the personality.

However, I do this at most 2-3 times a year, sometimes less.

This is because when you begin to substitute personal development with drugs, you’ll end up believing whatever bullshit is convenient to you. It’s very easy to fall victim to the mind’s illusions when you don’t take the time to integrate these new truths into your own life.

It takes time to test theories and to interact in a new configuration. If you simply do so without question, you may find yourself hugging crystals thinking you can influence the world from your basement due to “how powerful” you are.

The ego likes to inflate itself and when you don’t cross reference epiphanies with others, you end up loving your own bullshit!

Additionally, thinking on a cosmological level – existentialism – you get to see yourself over time and compare it to the universe itself. You become small and the universe becomes large.

This is fine, it helps disintegrate the ego, however – you also need to look internally. It’s not just about what’s out there that needs exploration, it’s also about “what’s inside”.

The journey without and the journey within are endless – finding balance is key to not getting consumed by the thoughts that may plague you.

Of course, this is only touching the very tips of this iceberg, but it should be more than enough to get your grey matter tinkering on these ideas.

How has cannabis fundamentally changed you for the better? 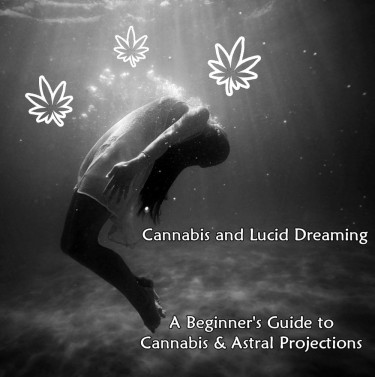 CANNABIS AND LUCID DREAMING, HOW DOES IT AFFECT YOU?